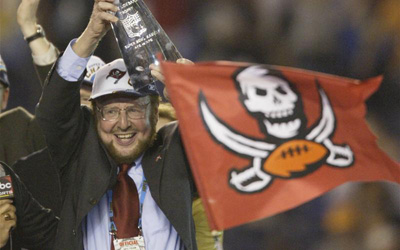 Malcolm Glazer, the man behind the 2005 takeover of Manchester United and owner of the NFL’s Tampa Bay Buccaneers, has died aged 85.

His death is believed to not have any effect on the running of the club, with his children in charge and sitting on the board of directors.

“Staff at Manchester United extend deep and sincere condolences to them all at this difficult time.”

Glazer also owned the Buccaneers since 1995 and saw the franchise lift the Super Bowl in 2002.

A statement from the Florida franchise read: “We are saddened to announce the passing of Owner/President Malcolm Glazer earlier this morning.

“A dynamic business leader, Glazer helped mould the Buccaneers into a model franchise and one respected league-wide. Since being purchased by Glazer in 1995, the Buccaneers franchise has earned seven playoff berths, five playoff wins, and captured its first Super Bowl championship in 2002.

“Known among his league peers as a pioneering thinker, Glazer infused his team and employees with the determination and dedication to be the best in the NFL. Glazer’s commitment to building a championship organization has provided the foundation for continued success, on and off the field.

“Glazer’s input was instrumental on the league level as well, as evidenced by his time serving on the NFL’s Finance Committee. He also played a major role in Tampa becoming a host for the Super Bowl on several occasions.”

Different opinions across the Atlantic

Glazer’s takeover of Manchester United was controversial because of the amount of debt he incurred when he bought the club.

However, in the States he is well respected for turning the Buccaneers into Super Bowl champions in unlikely circumstances when he first took over.

Glazer leaves behind his wife Linda, six children and 14 grandchildren.