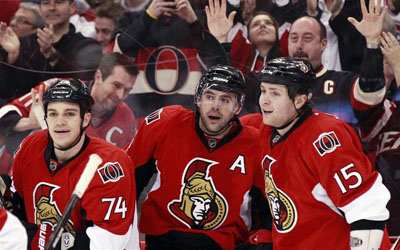 The deal will make TSN and RDS the official broadcasters of the Ottawa Senators through the 2025-2026 season.

“We recognized early on that our regional broadcast rights coming up for renewal was a very important asset,” said Senators owner Eugene Melnyk. “This new 12-year agreement with Bell Media represents one of the most wide-ranging and comprehensive deals in NHL history. A long-term deal was personally important as it will allow us to work very closely with the Bell family to continually integrate emerging and evolving technologies so our fans receive a superior product for our regional television and radio broadcasts. This agreement is significant for the Senators, our fans, and the future of our franchise.”

“This comprehensive partnership marks an exciting new chapter for the Ottawa Senators and all of their fans, as well as TSN, RDS, and Bell,” said Kevin Crull, President of Bell Media. “Leveraging the strength of the world-class hockey production at TSN and RDS, as well as Bell’s extensive assets and reach, we are eager to amplify Ottawa Senators regional coverage to a whole new level.”

Beginning next season, the agreement will see TSN and RDS each broadcast its slate of regular season and pre-season games in the Ottawa Senators’ designated broadcast region, which spans Eastern and Northern Ontario,Quebec, Atlantic Canada, and Newfoundland.

The new agreement also grants full radio broadcast rights to TSN Radio 1200 in Ottawa, continuing to make it the official English radio voice of the Ottawa Senators over the next 12 years. Details on the French-language radio broadcasts will be announced in the coming weeks.

Additionally, the Senators and Bell are strengthening their exclusive corporate telecommunications sponsorship over the long-term. It includes a broad variety of activations on all levels, including community engagement, in-arena promotions and branding, and retail support through The Source.