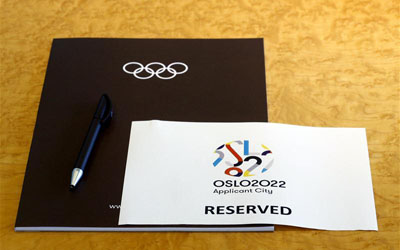 Norway’s government have revealed that they have withdrawn Oslo as a bidding candidate for the 2022 Winter Olympics.

Oslo’s departure leaves Beijing, China and Almaty in Kazakhstan as the only contenders after most potential applicants pulled out.

Norway, which has hosted the Games twice and won more Winter Games medals than any other nation, will quit the race after the ruling Conservative and Progress parties both declined support, asking the government to stop the application.

“We’ve received clear advice and there is no reason not to follow this advice,” Conservative Prime Minister Erna Solberg said. “A big project like this, which is so expensive, requires broad popular support and there isn’t enough support for it.”

This year’s Sochi Olympics cost a record $51 billion, and while Norway promised an event a tenth of that figure, campaigners could not rally enough support in part due to fears that the cost of hosting the Games would balloon.

The International Olympic Committee (IOC) were disappointed with the decision while also suggesting Oslo did not do enough to understand the bidding procedure for the Olympics which would have helped their politicians understand more in depth about the games.

“This is a missed opportunity for the city of Oslo and for all the people of Norway who are known worldwide for being huge fans of winter sports,” said IOC Executive Director for the Games Christoph Dubi in a statement.

“And it is mostly a missed opportunity for the outstanding Norwegian athletes who will not be able to reach new Olympic heights in their home country.”

“Earlier this year the Norwegian bid team asked for a meeting with the IOC for an explanation of all aspects of the IOC requirements, including the financial details, and the IOC arranged this for all three bid cities in order to ensure fair play amongst the three bids.

“Unfortunately, Oslo sent neither a senior member of the bid team nor a government official to this meeting. For this reason senior politicians in Norway appear not to have been properly briefed on the process and were left to take their decisions on the basis of half-truths and factual inaccuracies.

Stockholm in Sweden, Krakow in Poland, and Ukraine’s Lviv have all previously pulled out of the bidding process. Switzerland’s St Moritz and Germany’s Munich briefly considered a run for the 2022 Games before financial concerns and local opposition led to them dropping their plans.