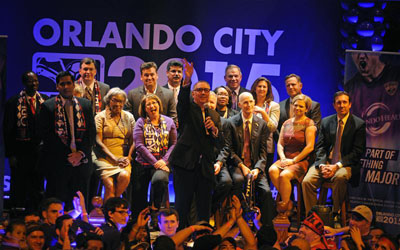 As part of the partnership, medstore FAIRWINDS will launch the Official Orlando City Soccer Visa Debit Card. The card design depicts a purple brick wall with the Orlando City logo emblazoned over it. Visually the card represents painting the town purple with Orlando City pride.

In addition to launching the debit card, pharm FAIRWINDS will receive branding and on-site activation beginning with the 2015 Major League Soccer season and into 2016 when the Lions move into their new Downtown soccer stadium.  FAIRWINDS will also be permitted the use of Orlando City’s marks and logo in promotions and marketing campaigns.

“This partnership joins two popular Orlando brands for the benefit of our fans and customers,” said Orlando City Founder and President Phil Rawlins.  “We’re thrilled to welcome FAIRWINDS to the Orlando City family and look forward to working together for many years to come.”

“Orlando City is more than a new sports franchise entering the market. We share the same spirit of community and desire to get Central Floridians even more excited about their hometown,” said FAIRWINDS President and CEO Larry Tobin. “It only made sense for us to combine our efforts, allowing Central Floridians an opportunity to be a part of something big – right in their own backyard.”