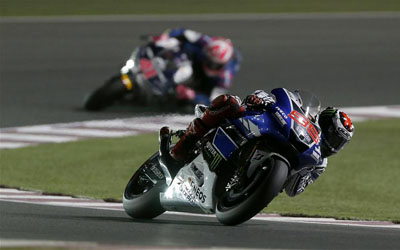 MotoGP Begins with a Bang with New Audience Surge

The opening race of the 2013 MotoGP season saw major audiences figures for a number of broadcasts.

Spanish TV saw its Tele5 broadcast increase by a whopping 44.6% over last year’s audience for the race with 4.5 million viewers, with a peak of 5.2 million, taking a 25.2% of the country’s audience share. Meanwhile, Italian television, bolstered by the highly anticipated return of Valentino Rossi on his beloved Yamaha M1, saw audiences go up to 5.28 million – peaking up to 6.63 million – for the race under the floodlights with a 17.5% broadcast share.

Cal Crutchlow’s early pre-season form looked to have triggered a humungous increase in British audiences, as nearly 75% more people tuned in over the previous year, with 1.7 million viewers witnessing the action, during which figures peaked at 2 million. Germany turned up in force once again as well, as 410,000 MotoGP fans saw their local hero Stefan Bradl unfortunately crash out after the tough battle with nine-time world champion Rossi.

In addition to the regular TV broadcast, the MotoGP season-opener was also available on over 40 planes featuring Sport24, the 24/7 live sports channel produced and distributed by IMG Media exclusively for the in-flight and in-ship markets, bringing MotoGP Live coverage to selected flights operated by Gulf Air, Lufthansa, Emirates & Turkish Airlines.