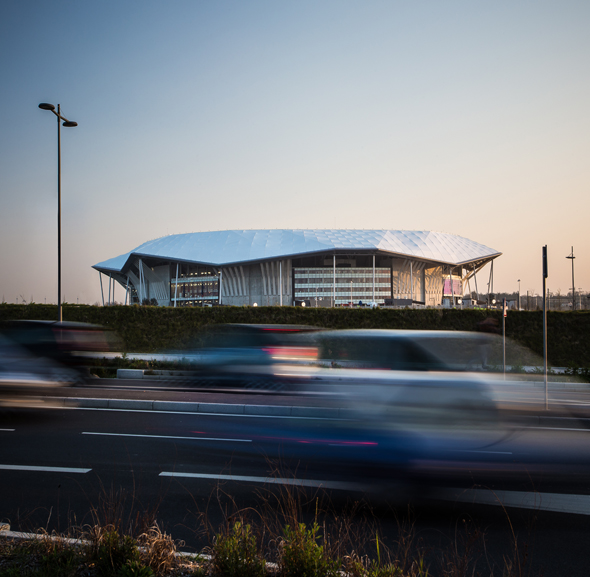 by Populous’ Richard Breslin, with Garry Reeves and Emiliano Cevallos

It has been an amazing year for football in Lyon. Firstly, the new stadium opened after ten years of planning and construction Then, the team, which was ninth in the league when the stadium opened, and looking unlikely to challenge for the Champions League places, went on to win every home game, eventually finishing 2nd.Lyon hosted six games in the UEFA Euro 2016 Championships, and 500 young people from around the world met in the city to spread the message of football for good through streetfootballworld Festival 16.

There’s obviously something in the water in Lyon. Garry Reeves, project lead for Parc Olympique Lyonnais, and Emiliano Cevallos, project lead for the overlay design of streetfootballworld Festival 16, explain how their projects have helped Lyon to celebrate an amazing year.

Lyon is a very special city, and one that Populous has been deeply involved with for over a decade now. It was in early 2006 that the firm was first approached by the owners of Olympique Lyonnais. At that time the club was in the middle of a 7-year spell as champions of the French Ligue 1. In particular, they were really interested in the work that we were doing for Arsenal at the new Emirates Stadium. I remember meeting with the club’s top representatives on a wet and windy day in the site hut in Highbury, right in the middle of the building site- not  the most glamorous of places. It was there that Club President, Monsieur Aulas, declared that this was the model that OL wanted; A stadium of their own, to control their own economic future.

At the heart of the brief was a desire to create a stadium for the team and its fans. As a city, Lyon is unique. At its core is the ‘confluence’, the meeting of the rivers Saône and Rhône, which has defined the city for generations. With the rivers came trade and influence, and the city has always been a combination of tradition and future, meeting and mixing. You can only be grateful that this also brought the great culinary tradition to Lyon. If you’ve had a bad meal here, you’ll have tried very hard to find it. The spaces within the new stadium embrace this heritage, with great food and beverage options at every level of hospitality experience.

A city is its people and a club is its fans. We designed Parc OL to facilitate and generate an incredible atmosphere, whatever the event. The OL home fans are well known throughout France for singing to one another between the north and south stands, they even have crowd leaders to orchestrate the singing. So one of the key features of the bowl design is a flat rake on the end stands, meaning that every fan in the stand can see one another, really intensifying the atmosphere. Matches are selling out, revenues are up, and the stadium was voted the best of all ten venues during Euro 2016 by French magazine Le Moniteur.

Whilst it is primarily the home ground of a top-level football client, a design that could host  a variety of sports and events, was also key in the initial brief from the club. The European Rugby Champions Cup Final at the stadium in May, attracted a sell-out crowd and produced an incredible atmosphere. And while I didn’t make it to the Rihanna gig in July, a concert at Parc OL is up there on  my ‘to do’ list!

“Parc Olympique Lyonnais is a beautiful stadium, with an exceptional atmosphere that begins outside the enclosure and continues all the way through to the event inside. All the club’s aspirations, in particular, to build a real home where the team felt like it belonged, have been perfectly realised by Populous. They have created a place where people can spend quality time with their families, whether that’s at a game of football, a rugby match, a concert, or just strolling around the parks and boulevards outside.” Xavier Pierrot, Stadium Manager, Parc Olympique Lyonnais

OL fans will have to wait until week two of the new season to welcome their team back to Parc OL. We’re looking forward to seeing if the incredible atmosphere generated by the home fans in their new stadium will be able to drive the team onto further success, and dare we say it, another league title!

It really was a great time to be in Lyon this summer. Our relationship with streetfootballworld began as part of my Populous fellowship, researching the potential of sports architecture as a catalyst for social change and disaster support around the world. At the heart of our partnership is a deeply-held shared belief in the power of sport to affect positive change in the world.

streetfootballworld Festival 16 took place at the Sport dans la Ville campus in Lyon between 28th June and 7th July 2016, bringing together over 500 disadvantaged young people from around the world, and culminating with a football3 tournament. One of the most exciting aspects of the Festival 16 design, and one of the key challenges, was in providing spaces that served as both educational facilities and sporting arenas. These requirements meant thinking quite creatively about designing spaces that promote full interaction between players, teams, volunteers and spectators, to create a fun and encouraging environment for everyone involved.

In particular, the ‘central pitch stage’ erected at the heart of the site played various important roles throughout the week. As well as hosting a full orchestra and 100-person choir during the opening ceremony, it was also a space for educational team-building activities during the first days of the festival, before transforming to facilitate key tournament management areas and shaded socialising space; a functional and central hub from which all participants can enjoy the atmosphere of the tournament.

Throughout the ten day event, we were really able to see our design work for the festival, which was a great feeling. Having a design that works for an organisation with a character as strong as streetfootballworld is a big challenge, but I was really pleased to see the results, and proud that Populous were able to partner with such a great organisation and event.

Garry is a Principal at Populous, joining the firm in 2002, when he became the Project Architect from concept to planning for the Milton Keynes stadium and the Arena MK, as part of a comprehensive redevelopment which includes 28,000m2 of retail facilities. The new 30,000-seat stadium for MK Dons stadium leads the field with the quality of its audience facilities and in the way it incorporates a hotel designed within a sports building.

In his role as Project Architect with the O2 Arena team, formerly known as the Millennium Dome, Garry was involved form inception to completion with the scheme to create the World’s most successful venue inside the world renowned building in London’s docklands.

Garry was the Project Lead and designer of the stadium for Olympique Lyonnais football club, as well as their adjacent training centre.

Garry is currently one of the Lead Designers on the new Bristol Arena project in the UK and has been intimately involved in bringing the design from the competition winning stage, through developed design and planning, up to the submission of tender information.

Garry’s all round design and construction experience enables him to take a leading role on projects from inception to completion. He is now using his experience to research and develop alternative methods for venue flexibility and operational optimisation, with a focus on improving the customer experience.

Emiliano was born in Mexico City where he gained an Architecture and Urbanism degree from the Unversidad Iberoamericana. After graduating he continued his studies at the Architectural Association in London, from where he holds a Masters degree in Housing and Urbanism.

Prior to joining Populous, Emilliano worked for an engineering consultancy firm where he gained in-depth experience designing challenging geometric structures for prestigious projects. Emilliano is an Associate of Populous, joining the firm in 2009 to work on the First Direct Arena project, where he was particularly involved in the façade design, implementing BIM strategies and coordinating with the subcontractors. The Arena, the most sustainable arena in the UK with a BREEAM Very Good rating, was opened to great acclaim in 2013. Emiliano has been extensively involved in the Dubai Expo 2020 masterplan project, and major arena projects in Europe and the Middle East.

Emiliano has a passion for the potential of sport architecture to affect social change, and is leading a group of global staff on the EMEA region’s partnership with streetfootballworld.