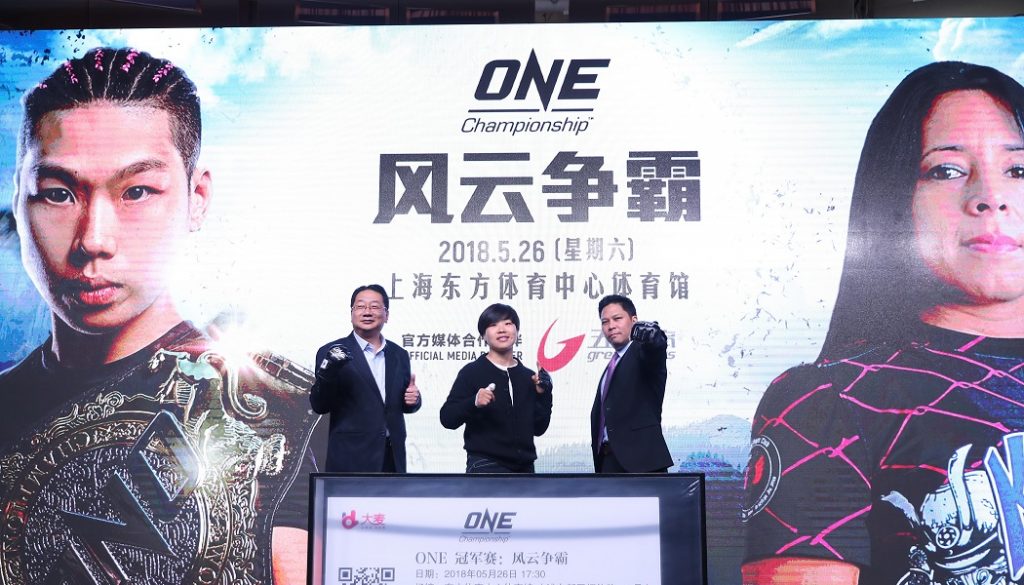 ONE Championship announced a partnership with Great Sports Media.

The partnership will commence at ONE: BATTLE FOR THE HEAVENS, which takes place 26 May at the Shanghai Oriental Sports Center. In the main event, reigning ONE Women’s Strawweight World Champion “The Panda” Xiong Jing Nan returns home to China to defend her title against the challenger, Laura “La Gladiadora” Balin of Argentina.
Victor Cui, CEO International of ONE Championship, stated: “ONE Championship is proud to announce its partnership with Great Sports Media, to bring fans the unique action of world class martial arts to the Chinese audience. Martial arts is on the rise globally, and ONE Championship is the home of martial arts.

“Xiong Jing Nan is an incredible martial arts champion and we are extremely proud of her accomplishments. ONE: BATTLE FOR THE HEAVENS is going to be a spectacular evening that fans will not soon forget. We are excited to continue delivering an authentic martial arts experience to fans all throughout China.”
Weng Weimin, General Manager of Great Sports Media, stated: “Recently combat sports are growing very fast in popularity. We believe ONE Championship has a bright future in China, and we share the same culture and values. We hope though joint efforts to introduce this sport to a wider Chinese audience, makes them fall in love with ONE more.”

ONE Championship and Great Sports spoke to media in attendance, revealing ONE Championship’s plans in China for the year 2018, including its stacked calendar of events. The two companies are set to collaborate throughout the foreseeable future and also announced that, two of the top talents from Great Sports, Ni Tianqi and Zhuang Ningyu, have joined ONE Championship as Chinese language cageside commentators.

Xiong Jing Nan, ONE Women’s Strawweight World Champion, stated: “Thanks to ONE Championship for giving me the great opportunity to perform at home in Shanghai, China in the one of biggest international cities of the world. It’s really honor for me as an athlete. Although I have experienced competing in China so many times, this time I feel so much more excited because I have the chance to showcase the beauty and strength of Chinese martial arts to the entire world on the ONE Championship platform. I will do my best to defend my title and bring honor and glory to my country.”

Laura Balin, ONE World Title Challenger, stated: “I am very thankful to ONE Championship for giving me the opportunity to compete for the ONE Women’s Strawweight World Championship. I am excited to join the organization and showcase my talents and skills on the global stage of martial arts. My opponent Xiong Jing Nan is a talented athlete, and it will be a difficult test for me. But I will bring my absolute best to the cage to bring the title back home to Argentina.”