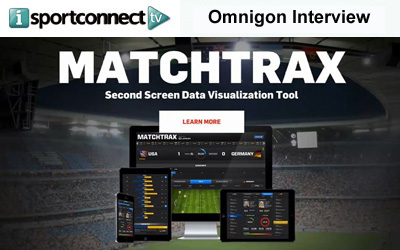 iSportconnect TV has released a special Digital Media Cafe interview with one of the founding partners of digital consultancy agency Omnigon, David Nugent.

Hosted by David Granger, the pair discussed the changes in consumption of sports and how mobile devices are becoming one of the key mediums for a personalised experience.

“North Americans are obsessed with data, and it’s far from having reached its peak,” explained Nugent. “What we are doing with NASCAR is a great mobile experience, it’s different from anything people have seen so far.”

Speaking about MatchTrax, the new data app Omnigon has developed with Fox Sports, Nugent commented that fans are being served in a way they have never been served before.

“MatchTrax takes data and creates experience around an event which is a supplement to what you see in broadcast, but can’t be conveyed via broadcast,” he said.

Fans can tailor their viewing, thanks to the explosion of digital. In the next four years, things should evolve even more, and Nugent’s feeling is that they will delve deeper into the characteristics of games, while analytics  and performance will continue to be analysed.

He added: “It may also affect performances on the pitch, as it will allow managers and coaches to interpret who the should be playing at any given time.”