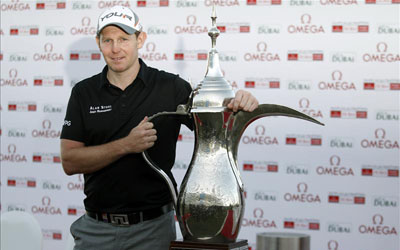 Swiss luxury watchmaker Omega has extended its title sponsorship with Dubai Desert Classic and the Dubai Ladies Masters for another three years until 2017.

The signing of the deal comes on the back of a landmark moment in the history of the Omega Dubai Desert Classic, drugs which celebrated their 25th anniversary earlier this year by lining up a top-class field, health spearheaded by world number one Tiger Woods, European No.1 Henrik Stenson and brand ambassador Rory McIlroy among other past champions.

Scotland’s Stephen Gallacher, recently named as a “golf in DUBAi” ambassador, created history when he became the first player to successfully defend the Classic title.

“We are delighted to be continuing our association with the Omega Dubai Desert Classic and the Omega Dubai Ladies Masters, both world-class events which have played a key role in positioning the city as a major golfing destination,” said Raynald Aeschlimann, Omega’s Vice President and International Sales Director.

“Golf is one of the fastest growing sports in the Middle East, where the number of courses and the number of rounds played each year have gone up exponentially.

“The exposure we get from these two events as title sponsor is very important. You cannot measure this experience in terms of money, but there’s a very good response to all that we’ve done in this dynamic region,” he added.