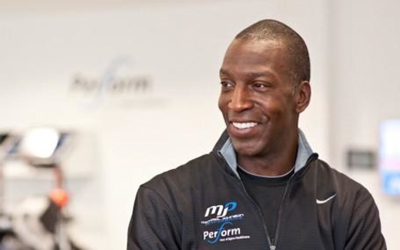 The four-time Olympic Gold medallist will now have the group work on speaking and brand partnerships, as well as representation of and consultancy for Michael Johnson Performance (MJP), the athletic training for youth, college and professional athletes.

Johnson said: “I am delighted to be working with Benchmark Talent as Michael Johnson Performance expands further within the UK.

“I truly believe the success we have had in the USA can be echoed and developed further in this always exciting sports market, and I look forward to welcoming a wide range of organisations to our facility at St George’s Park as the MJP brand becomes a key part of the UK sporting landscape. “

Benchmark Talent’s Lisa Norman added: “Michael is an inspirational figure not just for his accomplishments on the track but for all his achievements off it.

“His drive and ambition is matched by his vision, and his success with MJP is reflective of his will to win, to innovate and to push boundaries.

“Like so many of his teammates and colleagues, we are excited to be working with Michael because we know he will push us to perform more and more impressively on a daily basis – as he has throughout his career.”