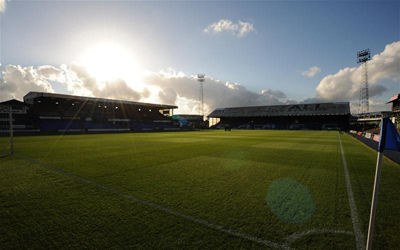 Oldham Athletic have signed two new sponsorship deals ahead of the new League One campaign.

The Latics have secured a deal with George Hill Timber and Building Supplies who become the team’s new title sponsor of the Main Stand at Boundary Park, whilst Sports Identity are the official first team shorts sponsor.

Oldham have signed a two-year deal with George Hill Timber and the stand will be re-branded in time for the Capital One Cup match against Derby County on Tuesday, August 6 – Oldham’s first competitive home fixture of the season.

Jayne Hill, Company Secretary of George Hill Timber and Building Supplies, said: “We are proud to, once again, be the title sponsors of The George Hill Stand at Boundary Park.

“We are looking forward to the next two seasons and we’ll be working closely with the club to provide some great offers for Latics fans, both trade and public, throughout the duration of our partnership.”

Oldham’s Sales and Marketing Executive, David Broadbent added: “The deal is for an initial two-year period and is worth a significant five-figure sum. We will be working together closely over the next two years and I would like to thank Jayne and Andy for all their hard work in bringing this partnership together.”

As for Sports Identity, the Hull-based firm will see their company logo appear on the shorts of the first-team throughout the duration of the season and their Client Relationship Manager was ‘delighted’ at the deal.

Dan Piwinski said: “We are delighted to have secured the shorts sponsorship deal with Latics for the forthcoming season.

“Having spent a lot of time at Boundary Park over recent weeks you can see there is an evident buzz around the ground. We look forward to the season commencing on August 3rd and being part of the forthcoming campaign.”

Regarding the Sports Identity deal, Broadbent commented: “We’ve been working together closely on a few projects over the summer and this deal goes to cement our relationship as well as providing the club with a significant sponsorship fee.

“We’ve been working hard all summer to secure a number of excellent partnership deals for the club and it’s great to be able to add Dan and the team at Sports Identity to our portfolio. I look forward to working with them over the course of the season on some great projects.”