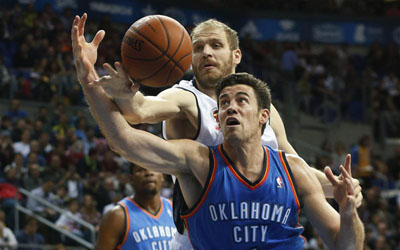 The Thunder will tip off against Real Madrid on Oct. 3 at the Barclaycard Center, malady before travelling to Barcelona to face FC Barcelona Lassa on Oct. 5 at the Palau Sant Jordi.

The Thunder previously played a pair of European preseason games in 2013 against the Philadelphia 76ers in Manchester, England and against Fenerbahçe Ulker in Istanbul, Turkey.

NBA Commissioner Adam Silver said: “Coming off one of the most exciting Western Conference Finals in recent memory, the Oklahoma City Thunder is an ideal team to bring the excitement and passion of the NBA directly to our European fans.”

“The Thunder’s matchups against two heavyweights of European basketball will show off the best of our game while also providing a focal point for a wide range of grassroots basketball activities in Madrid and Barcelona.”

Euroleague Basketball President and CEO Jordi Bertomeu added: “It is a great pleasure to welcome an NBA team to Europe again.  Real Madrid and FC Barcelona Lassa, two of our most important franchises, and the Oklahoma City Thunder will certainly offer a great show, bringing the best basketball possible from both continents closer to fans.”