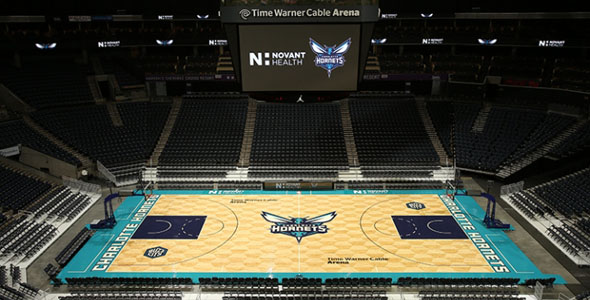 A pair of Novant Health logos have been positioned in front of each bench as part of an enhanced partnership between the two organizations. This is the first time the franchise has had a corporate partner represented on its court.

The floor, which features the team’s primary logo at center court, has a cell pattern stained in the wood and includes a teal border and purple free-throw lanes. Both baselines have the words “Charlotte Hornets” in the team’s font. The design includes a pair of Buzz City logos inside the three-point line on either end in a show of civic pride, as well as the team’s Crown CH logo at center court on the apron. The Time Warner Cable Arena logo appears twice on the court as it has in the past.

“We are very excited to reveal the design of our playing floor to our fans,” said Hornets Sports & Entertainment President & COO Fred Whitfield. “We believe the look represents our identity, from the cell pattern on the wood, to the Buzz City logos, to having the full ‘Charlotte Hornets’ on the baselines. We are also pleased to add the logo of our great partner Novant Health as they continue to find ways to make healthcare remarkable.”

With the addition of the Novant Health logos in front of the benches, the Hornets become the eighth NBA team to have partner logos on the court apron. Novant Health is the Hornets’ official healthcare provider, and the two organizations also partner on initiatives including the Novant Health Community Care Cruiser and the annual My Hero Gala.

“As the official healthcare provider for the team, Novant Health is proud to have our brand on this new court to further connect our two organizations,” said Novant Health Executive Vice President & Chief Consumer Officer Jesse Cureton. “We’re as excited as the rest of the community that the Charlotte Hornets are back.”