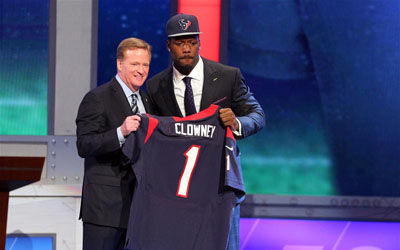 No. 1 Draft pick Jadeveon Clowney has signed an endorsement deal with Puma.

The South Carolina defensive end was selected No.1 overall by the Houston Texans last night.

The news initially reported by ESPN did not state the terms of the deal.

Puma does not have a deal with the NFL, so Clowney will not be able to wear Puma cleats in game.

“He represents everything we are and the consumer we are trying to attract,” said Jay Piccola, president of Puma North America, who presented Clowney with custom snakeskin Puma shoes valued at $2,500.

“I’m going to try to carry my name as far as I can,” said Clowney, who also has signed a draft-week deal with Gillette and longer-term deals with New Era and Wilson. “I’ll have a new hit for you too. Stay tuned. It’s going to come.”