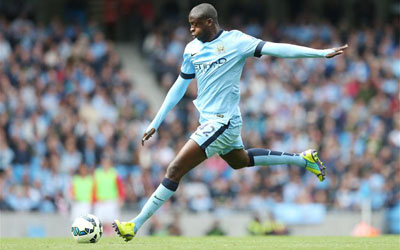 The Manchester City and Ivory Coast midfielder has agreed to a deal which will see him work alongside Nissan’s global UEFA Champions League and Orange Africa Cup of Nations 2015 partnerships.

The UEFA Champions League ambassadors will work with the company as part of the Engineers of Excitement program, which aims to enhance the experience of football fans through a range of activities including the exclusive Goal of the Week competition. Touré will also star in a series of new television and print advertisements for the UEFA Champions League due to premiere in February 2015.

Yaya Toure said, “I’m proud to be partnering with Nissan across its UEFA Champions League and Orange Africa Cup of Nations 2015 sponsorships. I have been fortunate enough to win lots of trophies in my career, but the Orange Africa Cup of Nations has always been my target as an African, so I am really looking forward to it and to working with Nissan to help bring the excitement around both of these fantastic tournaments to fans around Africa and the rest of the world.”

As the face of Nissan’s advertising campaign in Africa, Yaya Touré will play a key role around Nissan’s Orange Africa Cup of Nations 2015 sponsorship, further connecting football fans with the brand and helping increase excitement around its innovative range of products.

“Nissan is delighted that Yaya Touré has joined our team as a global ambassador,” said Roel de-Vries, Corporate Vice President, Global Head of Marketing, Communications and Brand – Nissan. “As one of the greatest midfielders of his generation, Yaya Touré is the perfect ambassador for our brand as he possesses great all round skills combining pace, power and high technical ability – features Nissan incorporates into its vehicles.”

Takashi Hata, Senior Vice President, Africa, Middle East and India – Nissan added, “As a three-time African Footballer of the Year, Yaya Touré is an icon to millions of people across the continent. As Nissan looks to further increase its market presence in the region, our partnership with Yaya Touré will help bring Nissan closer to the fans around Africa’s biggest football tournament and further strengthen our brand in a region to which we have been committed for over four decades.”

Nissan is the official global automotive sponsor of the UEFA Super Cup and UEFA Champions League.