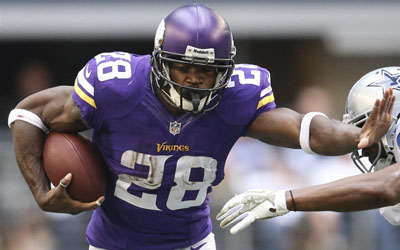 Adrian Peterson’s troubles have continued to deepen after sportswear giant Nike suspended their deal with the Minnesota Vikings running back.

Peterson was suspended again by the NFL team after being indicted on a child-abuse charge that involved hitting his four-year-old son with a stick.

After initial suggesting they would ‘closely monitor the situation’, Nike have confirmed their contract with the Texan was suspended.

“Nike in no way condones child abuse or domestic violence of any kind and has shared our concerns with the NFL,” company spokesman KeJuan Wilkins said in a statement. “We have suspended our contract with Adrian Peterson.”

Nike’s new stance means that the company will not be paying Peterson under the terms of his endorsement contract. It has been an unprecedented week for the world’s largest sports shoe and apparel company, having terminated the contracts of both Ray Rice and Oscar Pistorius.

Nike had a contract with Peterson through the 2011 season. Peterson then went without a shoe contract for the 2012 season, before signing with Nike again.

Nike joins Castrol and Mylan who ended their deals with player.

“In light of recent events, Castrol has decided to end our relationship with Adrian Peterson,” Paul Giblett, a spokesman for the company said Tuesday.

In a statement epipen makers Mylan said: “Mylan has ended all activities with Adrian Peterson. We remain committed to supporting those managing potentiall life-threatening allergies and will continue our educational efforts to increase anaphylaxis awareness.”

The announcement follows Radisson suspending their sponsorship of Minnesota Vikings and Anheuser-Busch revealing their concern over the way the NFL has handled abuse issues of late.