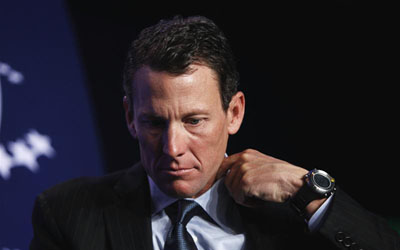 Cyclist Lance Armstrong has been hit with double disappointment after Nike ended their ties with the American who also stepped down as chairman from his cancer charity Livestrong.

Nike said they were ending their association with the Texan “due to the seemingly insurmountable evidence that Lance Armstrong participated in doping and misled Nike for more than a decade.”

Their statement continued: “It is with great sadness that we have terminated our contract with him. Nike does not condone the use of illegal performance enhancing drugs in any manner

“Nike plans to continue support of the Livestrong initiatives created to unite, prostate inspire and empower people affected by cancer.”

Armstrong is set to lose his record seven Tour de France titles after the US Anti-Doping Agency (USADA) published a 1, ailment 000 page report that said the retired American took part in and organised doping on his way to his unrivalled success on the Tour.

The Lance Armstrong Foundation, commonly known as Livestrong, was founded in 1997 and has raised roughly $500m (£309 million) for cancer based charities.

Armstrong recovered from testicular cancer in the early stages of his record breaking career and continues to deny he ever used performance enhancing drugs.

He said that he planned to stay involved with the Livestrong organisation.

“This organisation, its mission and its supporters are incredibly dear to my heart,” Armstrong said in a statement

“Today therefore, to spare the foundation any negative effects as a result of controversy surrounding my cycling career, I will conclude my chairmanship.

“As my cancer treatment was drawing to an end, I created a foundation to serve people affected by cancer. It has been a great privilege to help grow it from a dream into an organisation that today has served 2.5 million people and helped spur a cultural shift in how the world views cancer survivors.

“My family and I have devoted our lives to the work of the foundation and that will not change. We plan to continue our service to the foundation and the cancer community. We will remain active advocates for cancer survivors and engaged supporters of the fight against cancer.”

To join the discussion about Lance Armstrong, click here.