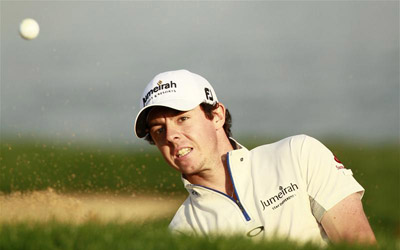 Nike have finally confirmed they have signed a major sponsorship deal with the world’s No. 1 golfer Rory McIlroy to a multi-year deal.

He will now be branded with the famous Swoosh on his clubs, ball, footwear, glove, apparel, headwear and accessories.

“I chose Nike for a number of reasons,” McIlroy said in a release, “It’s a company and a brand that really resonates with me. It’s young. It’s athletic. It’s innovative. They are committed to being the best, as am I. Signing with Nike is another step towards living out my dream.”

Financial details have not been released, but several reports have said the new deal is in the neighborhood of $200 million to $250 million over 10 years. If the deal with Nike is confirmed at $250 million, it would be the most lucrative endorsement ever negotiated in golf.

The 23-year-old Ulsterman makes his 2013 debut Thursday in the Abu Dhabi HSBC Golf Championship, where he is likely to be paired with fellow Nike player and former No. 1 Tiger Woods. Last year, McIlroy cemented his position as the top golfer in the world when he won five titles worldwide, including his second major championship at the PGA Championship. He also won money titles on the PGA Tour and European Tour, and he was voted Player of the Year on both sides of the Atlantic.

McIlroy will be playing with the world’s first high speed cavity back driver that conforms to USGA and R&A Rules — the Nike VR_S Covert.

McIlroy is making his first manufacturer change during his six-year career as a tour professional.

“To be honest, I’ve been blown away by the attention to detail when it comes to product,” McIlroy said. “Nike is clearly committed to being the best and that gives me a lot of confidence in what we can achieve together on the golf course.”

Cindy Davis, president of Nike Golf, was in Abu Dhabi for the announcement.

“Rory is an extraordinary athlete who creates enormous excitement with his on-course performance while, at the same time, connecting with fans everywhere,” she said. “He is the epitome of a Nike athlete.”

Rupert Pratt, Managing Director of sponsorship consultancy, Generate Sponsorship, told iSportconnect: “This is a real statement of intent from the brand who already have a number of high profile partnerships in golf across the world, including a multi-million dollar deal with Tiger Woods. With this latest deal it seems that Nike have identified golf as an area for significant growth within their product range and Rory is their man to lead that charge.

“McIlroy is without doubt the flavour of the month in the golfing world and he has all the potential to become one of the greats – although Nike have taken a measured gamble with the longevity of the partnership.”

“This deal is fantastic news for McIlroy and his team although it has come at some cost as he has lost longstanding and loyal supporters / relationships.”

McIlroy has lost partnerships with Titleist, Jumeirah and Oakley has brought a lawsuit against the Northern Irishman over their contract with him.

Have your say in our discussion >>