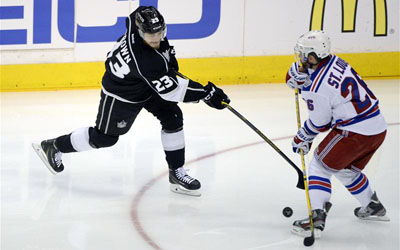 The National Hockey League (NHL) has announced a multi-year North American partnership with DraftKings one of the largest US-based destinations for daily fantasy sports.

Hockey fans will be able to take part in free to enter daily sports fantasy games on DraftKings.com for a chance to win numerous prizes, including trips to NHL events such as the 2015 Bridgestone, NHL Winter Classic, 2015 NHL All-Star Game, 2015 Coors Light NHL Stadium Series and 2015 NHL Awards.

As part of the agreement, DraftKings will serve as the Official Daily Fantasy Game of the NHL and will receive prominent brand placement across the NHL’s digital platforms, including NHL.com, NHL Mobile and the NHL’s Twitter and Facebook pages.

DraftKings will serve as the presenting sponsor of daily video previews for each regular-season matchup on NHL.com, NHL Mobile and the NHL app and “Fantasy Players to watch” segments on one of NHL Network’s signature shows, NHL Live.

In addition, DraftKings has partnered with numerous NHL Clubs, building its presence on the local level as well as the national level.

“We are pleased to partner with DraftKings, a leader in daily fantasy sports,” said Keith Wachtel, NHL Executive Vice President of Global Partnerships.

“Recognizing the direct correlation between fantasy sports and fan engagement, we look forward to providing our fans with a new opportunity to extend and enhance their NHL experience each and every day of the season.”

Jeremy Elbaum, Vice-President of Business Development at DraftKings, said: “The National Hockey League is a best-in-class organization, and DraftKings’ daily fantasy hockey players are some of their biggest fans.

“DraftKings is proud to partner with the NHL to bring premium new experiences to the League’s enthusiastic fan base.”