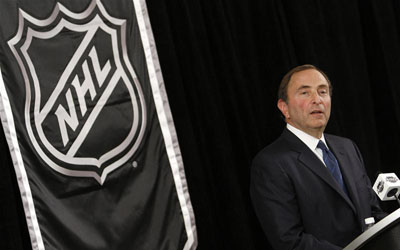 The first stages of the end the lockout has been intiated after the NHL and the players’ union came to a tentative agreement to end the current lockout.

The news came after a marathon negotiating session that lasted more than 16 hours, stretching from early Saturday afternoon until Sunday morning – the 113th day without hockey.

The NHL therefore will avoid having a second season lost because of a wage dispute – no other North American sports league has ever had to cancel one.

A lockout eight years ago that ushered in a salary-cap system to hockey for the first time wiped out the entire 2004-05 season.

NHL commissioner Gary Bettman and NHL Players’ Association executive director Don Fehr held a news conference in the early hours in New York to confirm the deal, which will cover the next 10 years.

Bettman said: “Don Fehr and I are here to tell you that we have reached an agreement on the framework of a new collective bargaining agreement, the details of which need to be put to paper.

“We have to dot a lot of I’s and cross a lot of T’s. There is still a lot of work to be done, but the basic framework has been agreed upon. We have to go through a ratification process and the Board of Governors has to approve it from the league side and, obviously, the players have to approve it as well.”

Fehr added: “Hopefully in a few days people can start watching people who are skating and not us.”

The dispute – which began on September 15 – was over the division of income between the players, owners and NHL.

The players’ share of hockey-related income, that reached a record $3.3b last season, will drop from 57 percent to a 50-50 split under the terms of the new deal.

The league has cancelled 625 games – up to 14 January – just over half the planned schedule that was to have started in October.

If the deal holds up the first games of the new season will take place on 19 January according to reports.