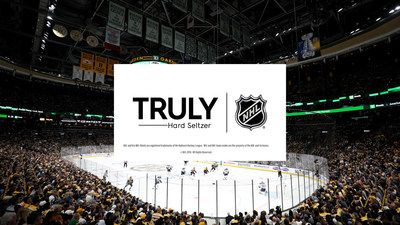 NHL Cheers Up With A Boston Beer Partnership

Launching at the start of the 2019-20 NHL regular season, the new five-year agreement marks the first national sports league partnership for The Boston Beer Company and Truly Hard Seltzer.

Throughout the NHL regular season, Stanley Cup Playoffs and Stanley Cup Final, Truly Hard Seltzer will receive exposure to NHL fans in numerous ways, including the opportunity to try new flavors as they are released.

“As the official hard seltzer of the NHL, we’re offering the best-tasting hard seltzer to the greatest sports fans out there,” said Dave Burwick, CEO of The Boston Beer Company, maker of Truly Hard Seltzer. “As a category leader, we’re seeing record demand for Truly year-round, not just during the summer months. Many NHL fans are already Truly drinkers and that’s why this partnership is a natural fit heading into fall. NHL fans can cheer on their favorite team with a refreshing Truly in hand at a game or watching from home or a bar with friends.”

“As the beer category continues to evolve, we’re thrilled to become the first national sports league partner of The Boston Beer Company,” said Keith Wachtel, NHL Chief Business Officer and Executive Vice President. “With a thriving business across multiple categories, they are an ideal partner to engage with our avid fan base. We’re excited to develop fun and unique activations across their portfolio of brands.”