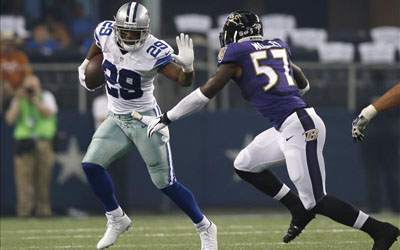 NFL’s leading rusher and Dallas Cowboys running back DeMarco Murray has entered into a multi-year marketing partnership with Silverleaf Resorts, one of the nation’s leading vacation ownership companies.

Murray became an owner at Silverleaf just over a month ago and recently has agreed to become an ambassador for the company. The campaign with Murray will include print advertising, digital media, online videos, exclusive meet & greets, and other unique experiences for Silverleaf owners as well as social media campaigns and promotions.  Silverleaf is also a sponsor of the Dallas Cowboys and intends to feature Murray in-uniform.

When asked about the partnership Murray stated: “It is an honor and a privilege to be part of the Silverleaf family; it’s a first class organization from top to bottom and a great vacationing alternative for any family or young professional.”

Dean Murray, SVP of Marketing for Silverleaf Resorts, stated about the partnership: “We are very excited to have a high character player and person, like DeMarco, associated with Silverleaf Resorts. We look forward to many years of success together.”

Murray, the NFL’s leading rusher through seven games for the first place Dallas Cowboys, is on pace to rush for over 2,000 yards, a feat that has only been accomplished by seven other RBs in NFL history. Murray has been instrumental in the team’s 6-1 start to the 2014 season with a league-best 1,072 yards from scrimmage and an NFL record 7 consecutive 100 yard games.