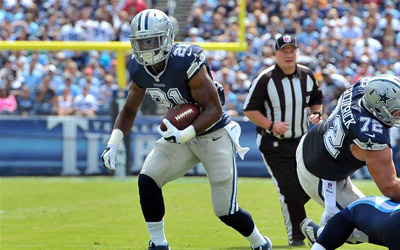 Randle was busted shoplifting a set of underwear and cologne from a Texas Dillard’s on Monday and fined $29,500 by the Cowboys for his transgression; he admitted “I did something stupid.”

Despite the incident, MeUndies is giving Randle enough in sponsorship money to mitigate the cost of his fine as well as a large supply of underwear to keep him from being an “impatient shopper” in the future.

“Joseph felt the need to turn a negative situation into a positive and teamed up with MeUndies to give back to his community and help families in need,” MeUndies head of marketing Dan King said.

“As a young company, MeUndies is faced with difficult challenges all the time. It’s up to us to turn a negative situation into a positive one, almost on a daily basis. How you learn from your mistakes fast is how you find success in our business and those lessons are applicable in all walks of life.”

Randle regretted his action and was pleased to put the issue behind him with the new deal.

“There is no excuse for my mistake last week, and I take full responsibility for my actions,” Randle said. “I let down my coaches, teammates, and family. My agent and I have spent a lot of time looking for ways I can turn my situation into a learning experience for young people.

“Partnering with MeUndies allows me the opportunity to give back to others less fortunate than myself, and spread a positive message of not making the same mistake twice.”