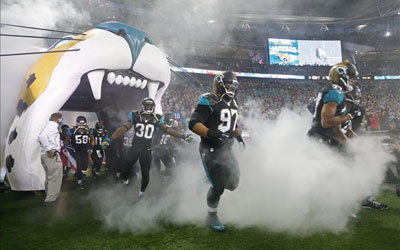 The National Football League (NFL) has announced the three games scheduled for the 2015 International Series.

This will be the ninth edition of the annual series and will once again be played at Wembley Stadium in London.

The Miami Dolphins will face the New York Jets, who will play in the UK for the first time for the match on October 4.

The game will also be the first-ever division match to be played at Wembley. It will be the Dolphins’ third appearance in London, having taken part in the first-ever edition in 2007 as well this year’s event.

The Jacksonville Jaguars, who will give up their third home game to travel to the UK, will face the Buffalo Bills on October 25 and the final game will see the Kansas City Chiefs host the Detroit Lions on November 1.

Mark Waller, executive vice-president of international for the NFL, said: “We are very appreciative of the outstanding support from our fans in the UK, not only for the games at Wembley, but for all of the related NFL events we have hosted throughout the city.

“We believe we have a great 2015 schedule that will continue to attract new fans to our sport and strengthen the bonds with our existing fans.

“To provide UK fans the opportunity to see games on consecutive weekends, to see new teams, and to attend a division game, which feature some of the most passionate rivalries in our sport, are signs of the growth and depth of our UK fan base.”

The timings of the matches will be announced at a later date. A potential 1:30pm kick off time in the UK could be used again after the positive reception it received from UK and US fans for the match between the Atlanta Falcons and Detroit Lions recently in London.

It’s clear with the lineup that while the NFL wants to mix in new teams, it insists on providing fans in London some semblance of continuity by sending back three teams who played there in 2014.