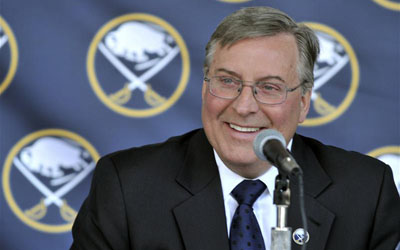 The vote took place in New York City, where NFL owners are meeting.

The Pegulas finished ahead of competing groups fronted by rock star Jon Bon Jovi and billionaire Donald Trump to buy the Bills, acquiring the franchise from the family of late owner Ralph Wilson for $1.4 billion.

In order for the Pegulas’ purchase to be ratified, three-quarters of the league’s 32 owners, including Wilson’s estate, had to approve the sale.

Kim Pegula is expected to have a high-ranking role with the Bills, working alongside current team president Russ Brandon.

Terry Pegula has a net worth value of more than $3.5 billion, and he made his fortune in the natural gas industry. In 2010, he completed a deal to sell a large portion of his company East Resources’ assets for $4.7 billion to Royal Dutch Shell.