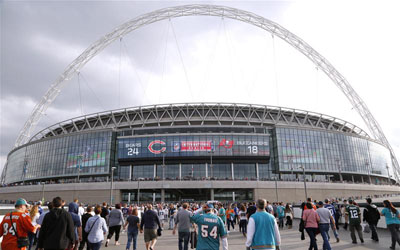 Mark Waller, from the National Football League (NFL), has revealed the sports organisation is in the process of 15 year initiative to potentially place a franchise in London by 2022.

Wembley Stadium in London played host to the first of three regular season games yesterday and has hosted games since 2007 when they began their plan.

Now into its seventh year, Waller, the Executive Vice President, International believes a franchise could be in place by 2022.

“I think we are seven or eight years into a 15-year process and in the greater scheme of things, history and the sport and what it stands for, that feels like a meaningful amount of time to make sure you do it right.

Waller, who was previously the Chief Marketing Officer, wanted to move away from just adding to regular-season games being played in England’s capital.

“I’m not sure the next step is to play four, five, or six games. I don’t think it needs to be a numerical progression of the number of games.”

He also revealed that the NFL was looking to increase their opportunities in Brazil.

“In terms of opportunities, not surprisingly Brazil is a market we are interested in. They have a lot of sports growth going at the moment between the World Cup and the Olympics. It feels like an opportunity to grow a sport in that market, he added.”