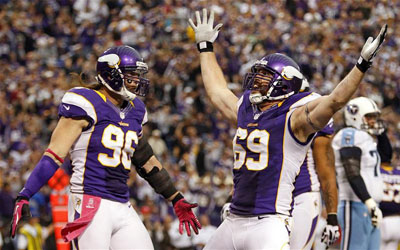 The NFL has confirmed Wembley will host a second NFL regular-season game in 2013 when the Minnesota Vikings play host to the Pittsburgh Steelers on Sunday, September 29, 2013,

This is in addition to the previously announced game set for Sunday, October 27, 2013 also at Wembley when the Jacksonville Jaguars will host the San Francisco 49ers.

“Since we started playing regular-season games in London five years ago, we have heard very clearly from our UK fans – they want more football,” said NFL Commissioner Roger Goodell, who announced the final schedule of UK games for 2013 at the NFL Fall Meeting in Chicago.  “We are excited to play two games in London and take this next step in the growth of our game.  We believe that more football will lead to more fans.”

The Vikings and Steelers will play the first of the two 2013 NFL games at Wembley Stadium, with kickoff set for 1:00 p.m. ET on September 29.  The game a Vikings home game and a one-year commitment by the club  is the first for Minnesota in the UK since a 1983 preseason game at Wembley.

“This is a unique opportunity for the Vikings organization to highlight our brand on an international level,” said Vikings Owner/President Mark Wilf. “Playing in London provides exceptional exposure to the team, as well as Minnesota’s impressive business community and tourism industry. We are honored to represent the NFL on a global level, and we look forward to playing in front of our international fan base.”

The Steelers, owners of an NFL-best six Super Bowl championships, will play for the first time ever in London.

“We are thrilled that our players and Steelers fans around the world will be able to enjoy the atmosphere at historic Wembley Stadium,” said Steelers President Art Rooney II.

Earlier this year, the Jaguars opened a new chapter for the NFL in the UK, making a multi-year commitment to International Series games in London.

Jacksonville will play one regular-season home game in the United Kingdom in 2013, 2014, 2015, and 2016, all at Wembley Stadium.  The team begins its ground-breaking initiative on October 27, 2013 against San Francisco.

The 2012 International Series game features the St. Louis Rams hosting the New England Patriots at Wembley Stadium on Sunday, October 28, before an expected sellout crowd in excess of 80,000.

The international series of regular-season games to date has contributed to increased NFL fan interest in the UK, with a current fan base of 11 million, including more than two million avid fans, a 32 percent increase in the past two years.

Television ratings have also shown substantial growth – with Sunday viewership of NFL games up 154 percent and the Super Bowl audience having increased 74 percent since 2006 – and the league has developed new and stronger business partnerships.

Participation in amateur football in the UK has also risen since the start of the international series, growing by approximately 15 percent per year since 2007.

Mayor of London, Boris Johnson was delighted with the news: “London has staged an extraordinary year of sport and I want to ensure this is a springboard for even more world class sports spectaculars in the future. A second NFL game headed to the capital is fantastic news for sports fans and will help to inject tens of millions of pounds into the city’s economy.”

Iain Edmondson, Head of Major Events at London & Partners, added: “London’s major events team has supported the NFL in growing its presence ever since the first regular season Game in 2007. We are thrilled to see this long-term relationship strengthen even further with the news of another Game for the city. However fans won’t have to wait until next year with another free NFL Fan Rally in Trafalgar Square on the eve of this year’s game next weekend.”