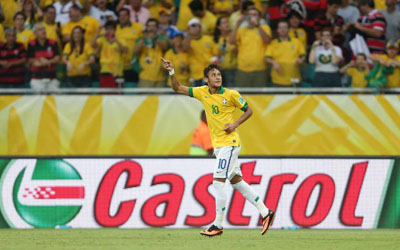 Castrol has announced today that Brazil and FC Barcelona forward Neymar has joined the British automotive lubricants brand as a global ambassador.

The partnership between the international football star and the world’s leading lubricants brand will run for 12 months.

The deal will see Neymar become the face of Castrol’s World Cup promotions as well as a ground-breaking new Castrol activation to be launched in April. Castrol is an official sponsor of the 2014 FIFA World Cup.

Commenting on the new partnership, Neymar said: “I’m delighted to be working with Castrol on an exciting new project that I hope will enable me to take my game to a new level.”

The partnership was signed in consultation with Rhodri Burgess of Wasserman Media Group, who has previously worked with Castrol to secure the services of Cristiano Ronaldo, Cafu and Marcel Desailly.