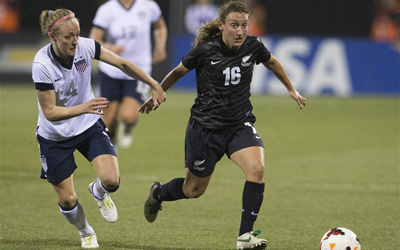 New Zealand has withdrawn their bid to host the 2019 FIFA Women’s World Cup, drug just days after the English FA did the same.

The Chief Executive of New Zealand Football, Andy Martin, confirmed that further due diligence showed they could not afford to host the tournament, as well as the 2018 Under-20 Women’s World Cup.

“We signalled our interest in May to give ourselves time to investigate the full implications of bringing a tournament of this stature to New Zealand,” Martin said.

“After making a detailed financial assessment regarding the impact of hosting this major event on the football calendar, we concluded that the 2019 event will come too soon for us.”

With England also pulling out, current bidders for the 2019 event are France, South Africa and South Korea.

New Zealand will host the men’s Under-20 World Cup in 2015 and Martin said the country “remained keen” to host the Women’s world Cup in the future.

The news means that France are now the favourites to host the event.

The English FA released a statement earlier in the week that read: “Expressions of interest were lodged to gain a wider understanding of the bidding process, the benefits associated to the tournament and the competition to host the tournaments.

“Having assessed all of these factors The FA will not be furthering its interest in these competitions at this time.”