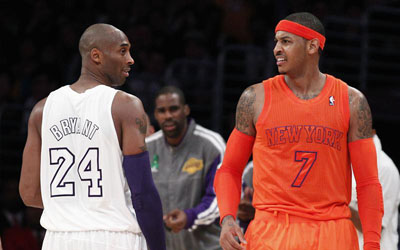 The Knicks are worth $1.1billion taking the No. 1 spot away from Los Angeles Lakers.

The Knicks‘ value rose 41%, mainly due to a $980 million renovation of Madison Square Garden that is expected to be completed this summer. The makeover resulted in an NBA-leading $243 million in revenue last season. The Knicks‘ operating income of $83 million was the highest in the league for a third straight year.

Also the Knicks have enjoyed a ratings boost with the team second in the Eastern Conference.

With the help of a new 20-year, $3.6 billion television deal with Time Warner Cable, the Lakers, while losing their top spot, did enjoy some success financially as well. They are worth $1 billion, up 11% from last year. The Lakers and Knicks are the first NBA teams to be valued at 10-figures.

The report also revealed that an average NBA team is worth $509 million, a 30% increase over last year.

Forbes has accounted the increase to higher revenue from television, new and renovated arenas, and the NBA’s new collective-bargaining agreement, which reduced player costs from 57% of revenues to roughly 50%. The labour deal also increased the amount of money high-revenue teams provide low-revenue teams.

Top Ten NBA’s Most Valuable Teams (in millions unless stated):