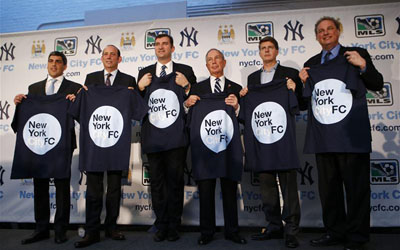 Adidas becomes an official partner of New York City FC and will manufacture the first team’s kit for their inaugural MLS season.

Replica jerseys, purchase supporter apparel, see scarves and headwear will also be made available to fans by the German sports brand.

Adidas will feature the New York City FC merchandise in their flagship NYC store in Soho.

Tim Pernetti, Chief Business Officer, New York City Football Club, said: “We are very pleased to welcome adidas to our rapidly growing New York City FC family and to be associated with one of the world’s leading and most recognisable brands.”

Chris McGuire, Director of Sports Marketing, adidas, said: “We are excited to partner with New York City FC and are thrilled that not only their first team but their Youth Academy teams will be wearing the three-stripes when they take the pitch next year.

“New York City FC’s entry into Major League Soccer is just another example of the league’s healthy success over the past two decades. Moreover, the Club’s dedication to player development matches up perfectly with our own commitment to grow the sport at all levels.

“We cannot wait for the fans to see what we’ve designed for both the team and for them, and are eager to watch the Club compete for trophies in its inaugural MLS season.”