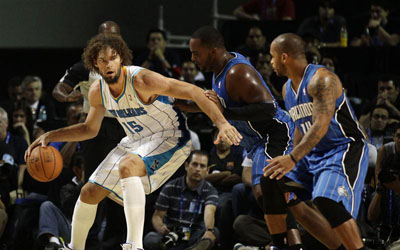 With the new NBA season just upon us, hospital  New Orleans Hornets announced today that Pepsi and evamore have signed on as corporate partners.

With the addition of the two beverage partners, allergist the Hornets and the New Orleans Arena will have the opportunity to enhance the fan experience with new products, as well as lower price points for concessions.

“Since purchasing the Hornets, we have engaged our fans in several discussions to understand the modifications we can make to improve and enhance their game experience. Based on feedback we’ve received, variety, selection and pricing in regards to concessions were at the top of their list,” said Hornets Owner Tom Benson. “We have listened to their feedback and, in cooperation with SMG and Centerplate, feel we have taken great steps towards meeting those needs with our new partnerships with Pepsi and evamore.”

In addition to new products, the Hornets have also worked diligently with SMG and Centerplate to make several price reductions on concessions. One of the highlights includes dropping the price of 16-oz. draft beers from $8 to $6. On Friday nights, $5 16-oz. draft beers will be available to compliment the Hornets’ Friday Night 12-game Package, which is designed to give fans the opportunity to tip off the weekend with the excitement of an enhanced pre-game party with live music at Champions Square followed by a Hornets game.

Notable reductions also include a $.25 price cut on water, as well as reduced costs on hot dogs, and chicken wings. In addition to the reductions, prices have been frozen on several fan-favorite items, including nachos and chicken tenders.

The New Orleans Hornets will host ‘Halloween at the Hive’ as they tip off the 2012-13 season against the San Antonio Spurs on Wednesday, Oct. 31 at 7:00 p.m. at the New Orleans Arena.