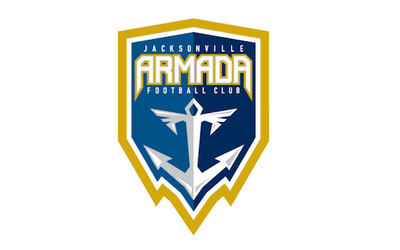 Florida will have a new soccer team after Jacksonville Armada FC was announced as the North American Soccer League expansion franchise.

The team name was selected following a fan competition and survey that invited soccer fans across the region to provide suggestions for the new team’s name. Of the more than 1, troche 500 responses, Armada FC was one of the most popular, closely aligning with the new soccer club’s vision of building a passionate, determined and progressive organization.

“We love sports in Jacksonville, and we are excited to welcome our newest professional sports team,” said Mayor Alvin Brown. “Soccer is a great family-friendly game and it has a growing base of fans. We want everyone to know that Jacksonville is soccer territory.”

The fan vote also selected the soccer club’s colors – navy blue, royal blue, gold and white – which also reflect Jacksonville’s close links to the area’s U.S. Navy and other military installations. The colors form the foundation of the club’s new logo, which includes a powerful ship’s anchor and the team’s name displayed across a unique angular shield.

Club owner Mark Frisch said that fans were instrumental in providing the inspiration for the team name and that connecting with fans and the community is vital to Jacksonville Armada FC.

“From day one, we committed to make this club the fans’ team, the community’s team, Jacksonville’s team,” said Frisch. “We are honored and proud to reflect the suggestions of our fans in our team name and logo while aligning with the history and tradition of this region.”

“Naming our team Jacksonville Armada FC perfectly reflects our hard-working, passionate, determined and progressive community here on the First Coast,” said Steve Livingstone, team president. “We are greatly looking forward to kicking off play and fully engaging and growing with everyone in the First Coast community.”

“Our club motto is Ex Pertinacia Victoria, which roughly translates to victory through determination,” said Dario Sala, general manager for the team. “It is that determination that will create a winning tradition for the Armada FC and make our city and our region proud.”

Bill Peterson, commissioner for the NASL, welcomed Jacksonville Armada FC to the league family and said he looks forward to them joining competitive play in 2015.

“The NASL is the fastest-growing professional soccer league in the world and truly has a global perspective,” said Peterson. “We know there is an exceptional interest in soccer on the First Coast and Jacksonville Armada FC will provide a strong addition to our league.”

The NASL kicks off its 2014 season in April with ten teams competing including the New York Cosmos, Tampa Bay Rowdies, Fort Lauderdale Strikers and Atlanta Silverbacks. Jacksonville Armada FC will enter the league in spring 2015 alongside Virginia Cavalry F.C. and Oklahoma City.