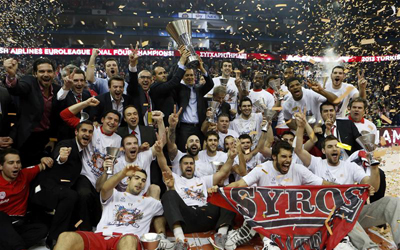 With the Euroleague Final Four set to begin later this week, there international lifestyle brand New Era have announced they will be the official headwear partner for the tournament as well as Euroleague Basketball and the Turkish Airlines Euroleague competition.

The three-year deal, approved by the league and its owners, adds to New Era’s current licensing relationship with the National Basketball Association (NBA), Major League Baseball (MLB) and the National Football League (NFL).

Under the terms of the agreement, New Era will have exclusive global distribution rights and branding for Euroleague headwear, namely caps and knits, as well as for Turkish Airlines Euroleague Final Four headwear. Beginning April 26 2014, to mark the start of the Turkish Airlines Euroleague Final Four in Milan, and running through to June 2017 at the end of the 2016-17 season, New Era will produce headwear throughout the seasons for the qualifying teams, official merchandise and marquee events, including the Final Four.

Best known for their signature 59FIFTY, New Era will have the rights to manufacture headwear with the 24 participating team logos.

“With over 93 years of traditional sports heritage, New Era is proud to form a truly authentic partnership with one of Europe’s most prestigious sporting organisations, Euroleague Basketball,” says Paul Gils, New Era VP EMEA. “We’re excited to bring our unique combination of style and fashion to the Euroleagues’s passionate fan base while providing these fans with the opportunity to own the official headwear of their favourite basketball teams.”

The agreement includes an integrated 360° marketing platform with brand visibility in the sports arenas, official websites and promotional material. During the season, the Euroleague is broadcast in 199 countries with an accumulated audience measured at 1.85 billion.

“We are really proud to welcome New Era, one of the global leaders in the industry with an authentic sports heritage that dates back over 90 years, as the new official headwear of the Turkish Airlines Euroleague.” states Jordi Bertomeu, Euroleague Basketball President and CEO. “This agreement is another example of the enormous possibilities that we bring to our commercial partners, opening the doors of both the top European competition and the top 24 clubs of the continent.”

Euroleague Basketball also announced a new partnership with AS, a sports media leader in Spain, that makes AS.com the official online destination in Spanish for Turkish Airlines Euroleague fans.

“We are really proud to launch this new initiative in one of our most important markets: Spain,” Mr. Alex-Gunnar Ferrer , Euroleague Basketball Brand and Communication Director, stated. “After the successful initiatives that we already launched in collaboration with Sport24.gr in Greece and Gazzetta dello Sport in Italy, our Spanish fan base will be able to enjoy the latest Turkish Airlines Euroleague information in its local language. We have worked to make this wish come true with the best partner possible, AS.com.”

The Final Four marks just the beginning of the partnership, which will see AS.com offer a new and expanded site to cover the Turkish Airlines Euroleague with all the best available content throughout the 2014-15 season.