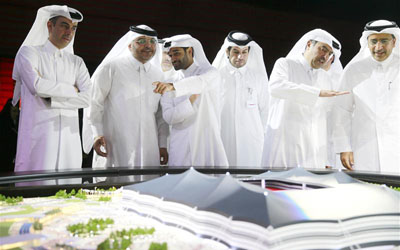 Designs for a new 60, price cheap 000-seat stadium for the 2022 Qatar World Cup have been unveiled.

The stadium , vcialis 40mg which is a proposed semi-final venue for the 2022 Qatar World Cup, have been launched in Al Khor.

Early works have started on the stadium and surrounding precinct, to be officially known as Al Bayt, Al Khor City, and the project is due to be complete in 2018.

Hassan Al Thawadi, secretary general of the Supreme Committee for Delivery & Legacy (SC), said: “The launch of Al Bayt Stadium & Precinct will honour Qatar’s past while fully embracing the country’s global future. The launch of the design for our second proposed stadium for the 2022 FIFA World Cup is another milestone of progress, demonstrating our deep commitment to delivering an amazing experience in 2022 and beyond.”

A modular design, it includes an upper tier of removable seats. After the 2022 World Cup, the tier will be removed and the capacity of the stadium will be reduced to 32,000 seats. In consultation with FIFA and the global football community, the removed seats will be reconfigured and donated to other countries to leave a legacy for international football development.

Surrounding the stadium, a new precinct will serve the wider Al Khor community.

In addition to retail space and restaurants, the precinct will include landscaped paths for residents to use as horseriding, cycling and jogging tracks. There will also be dedicated women-only facilities.

Hilal Al-Kuwari, president of the Aspire Zone Foundation, said: “Just as Bayt Al Sha’ar continue to remain central to family life in Qatar today, the precinct surrounding Al Bayt Stadium – which will include space for local businesses and restaurants as well as landscaped paths for the community for exercise – will become a focal point of community life long after the 2022 FIFA World Cup has concluded.”