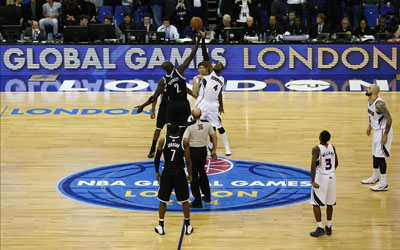 NBA Hints at Returning to London after O2 Success

The National Basketball Association (NBA) have strongly hinted that London may continue to host NBA regular-season games after a sell-out crowd at the O2 Arena saw the Brooklyn Nets defeat the Atlanta Hawks.

“We have plans in place to continue playing regular season games in London,” he told reporters before the sold-out game at London’s O2 Arena.

“We’re looking at other opportunities, maybe to play more games or possibly do a tournament at some point, but right now we’re going to continue on the same course.”

Silver, the NBA’s deputy commissioner, will take over from current commissioner David Stern when he steps down on February 1, 30 years to the day since he started running the league.

Stern has built the NBA into a global brand, and Silver said he wanted to carry on that legacy and possibly expand in Europe.

“I think most likely if we were to come to Europe, it would be with a division rather than a single team for ease of logistics, and it’s something we’re going to continue to look at,” Silver said.

The NBA also staged a pre-season game between Oklahoma City Thunder and Philadelphia 76ers in Manchester in October last year.