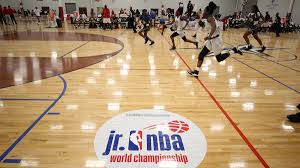 The NBA has taken a big step in connecting directly with children and young players with the launch of the first Jr. NBA World Championship which wrapped up in Florida this past weekend.

The global basketball tournament for 13 and 14-year-old boys and girls from around the world took place at the ESPN Wide World of Sports Complex at Walt Disney World Resort near Orlando from August 7-12.

Insights into the genesis and aims of the new event will be on the agenda at the iSportconnect Brands Masterclass on September 18, where Dan Rossomondo, the NBA’s Senior VP, Head of Global Media and Business Development, will be bringing his experience and wisdom to the discussions.

The NBA has been working with the rest of basketball to put on the new event. All participating coaches had to be licensed by USA Basketball or FIBA.

Festivities tipped off with an opening ceremony and celebratory parade at Disney’s Magic Kingdom Park.

Fox Sports aired 16 Jr. World Championship games under a three-year deal. All of the games were simulcast on the Fox Sports app, which provides live streaming video content through iOS and Android devices.

Dan will be taking part in the Brands Masterclass panel on Embracing Technology, just ahead of the NBA China Games and then the start of the NBA season October 16.

The NBA China Games 2018 will feature two preseason games between the Dallas Mavericks and Philadelphia 76ers, both in China for the first time. They will play in Shanghai at the Mercedes-Benz Arena on October 5, followed by a re-match on October 8 in Shenzhen at the Shenzhen Universiade Center.

“We work closely with our partners ahead of these international events so that they really deliver relevant value for them,” he said. “How we use technology to help do that is one of the things I look forward to talking about at the Masterclass.”

The iSportconnect Brands Masterclass takes place at the offices of Pinsent Masons in London and September 18.