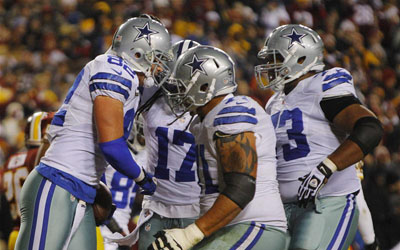 The deal begins with Nationwide sponsoring the Aug. 24 preseason game at Cowboys Stadium against the Bengals.

“We’ve got a lot in common,” said Cowboys owner/general manager Jerry Jones. “They don’t have any stockholders. Their stockholders, in a matter of speaking, are their customers, their fans, and so that’s what they appeal to. It’s a real privilege and an honor for Nationwide to take their initial foray into football and the NFL and do it with the Dallas Cowboys.”

In addition to the Bengals game, Nationwide will also be active in the Game Day Plaza at three additional home games and will introduce a fan promotion at the beginning of the season.

Nationwide chief marketing officer Matt Jauchius, added: “A lot of what we’re going to do is really show our presence in that first game. We were so impressed when we got to tour Cowboys Stadium and see all the assets there. What you really want to do is have your brand presence felt.”

Jauchius said the Cowboys are a first-rate, first-class professional organization that strives to be the best in everything they do, and that’s also what Nationwide is about.

“This is a sports marketing platform and franchise and opportunity like none other,” Jauchius said. “But I want to emphasize what Jerry said as well, the affinity and partnership between our organizations and what we stand for is very strong.”