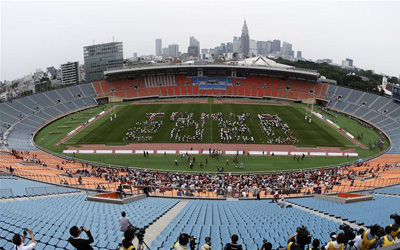 Tokyo’s National Stadium has been closed as it prepares itself for an extensive renovation project ahead of hosting the Olympic Games in 2020.

Olympic champion Koji Murofushi was joined by hundreds of school children to from the words Tokyo 2020 on the field ahead of the stadium’s final event –  an Asian Five Nations rugby match between Japan and Hong Kong.

“Being on the field today was very moving, viagra order ” said Murofushi. “This stadium is the sanctum of Japanese sport, ailment full of history and memories. I am delighted and deeply honoured to be here as part of the celebrations to mark its closure.”

The National Stadium was opened in 1958 and hosted athletics events during the 1964 Olympic Games.

The new stadium is designed by Zaha Hadid and will be constructed on the site ahead of the Olympic Games in 2020, cialis which Tokyo won the right to host at the 125th IOC Session in Buenos Aires last year.

Tokyo 2020 President Yoshiro Mori commented: “In six years from now, the new National Stadium will be the centrepiece of the 2020 Olympic and Paralympic Games and will play host to the world’s elite athletes. I am looking forward to joining the many fans that will gather here then to welcome the world, and to communicate the power and the values of sport and the Olympic Movement not only to the people of Japan, but to people across the entire planet.”

He continued, “The new stadium will be a legacy for future generations, and I hope the people of Japan will join us in uniting their efforts to ensure that the 2020 Olympic and Paralympic Games are a resounding success.”

The new National Stadium will also be used for matches during the 2019 Rugby World Cup, as well as hosting the Opening and Closing Ceremonies, athletics, football and rugby competitions during the 2020 Olympic Games.