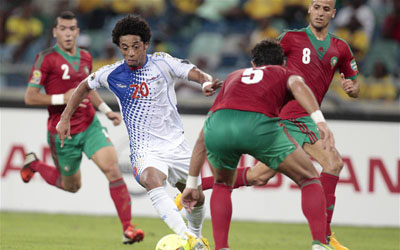 {jcomments off}The Confederation of African Football (CAF) has expelled Morocco from participating in the 2015 Africa Cup of Nations (AFCON).

Morocco were scheduled to host next year’s tournament but asked CAF to postpone the event due to concerns over the spread of the Ebola virus and fans travelling into the country from affected regions.

The Moroccan Government were given until November 8 to decide whether they still wanted to host the event, ask which they ultimately decided against.

CAF has now stripped Morocco as hosts and subsequently disqualified them from taking part.

“At its meeting on 11th November 2014 in Cairo, the Executive Committee of the Confederation of African Football (CAF) has taken note of the response of the Minister of Youth and Sports of the Kingdom of Morocco in a letter dated 8th November 2014 requesting the postponement of the Orange Africa Cup of Nations in 2015,” read a statement on CAF’s official website.

“This response clearly indicates that the Royal Moroccan Football Federation reiterated its refusal to hold the competition on the dates indicated (January 17-February 8, 2015).

“Therefore, having firmly and unanimously notified on 3 November its decision to keep the competition on the dates indicated, the Executive Committee confirmed that the Orange Africa Cup of Nations 2015 will not take place in Morocco.

“The Organising Committee of the Orange Africa Cup of Nations will later apply the statutory provisions that are required due to a breach of the Royal Moroccan Football Federation regulatory and contractual provisions, including those set out in the Host Association Agreement signed between CAF and the Royal Moroccan Football Federation in April 2014.

“The Executive Committee took note of receipt by 10 November 2014 of some applications of national associations confirming their desire to host the 2015 competition on the dates agreed.

“These applications are currently under review, and the Executive Committee will finalise the selection of the successful National Association shortly and confirm the place and date of the draw of the final tournament at the same time.

“The Executive Committee confirms the continuation of qualifiers match-days 5 & 6, which will be held during the month (14/15 November and 19 November), paving the way for the qualification of the 15 teams that will be joining the team of the host country.

“Accordingly, and following the refusal of the Moroccan party, the Executive Committee has decided that the national team of Morocco is automatically disqualified and will not take part in the 30th edition of the Orange Africa Cup of Nations in 2015.”

A decision is yet to be made on where the tournament will be held, with CAF currently reviewing a number of applications.