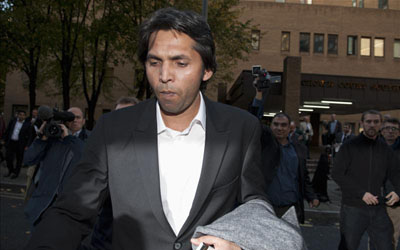 The 30-year-old former world No 2 Test bowler was released from prison last May after serving half of a 12-month sentence for a fixing scandal that rocked the sport.

He was one of three Pakistan cricketers jailed at London’s Southwark Crown Court in November 2011 after the discovery of a plot to bowl deliberate no-balls in the 2010 Lord’s Test against England.

Ex-captain Salman Butt was jailed for 30 months for his role as the ‘orchestrator’ of the plan, while fast bowler Mohammad Amir was detained for six months in a young offenders institution.

The trio have also been barred from the playing for five years as a result of bans imposed by the International Cricket Council.

In November 2011, the Court of Appeal dismissed challenges brought by Butt and Amir against their sentences.

Asif’s latest challenge has fallen on deaf ears as it as rejected.

Giving the decision of the court, Mr Justice Griffith Williams said: “We are not persuaded that there are any grounds, arguable or otherwise, for attacking the safety of the convictions of this applicant. The renewed applications are accordingly dismissed.”