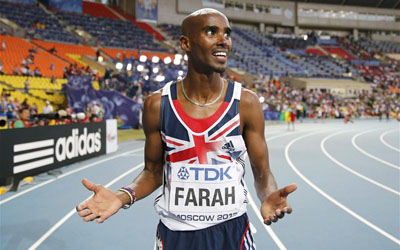 Organisers of the Vitality North London Half Marathon have announced that double Olympic, World and six time European Champion Mo Farah will be the official ambassador and race starter for this year’s inaugural event taking place Sunday 15th March 2015.

The race promises a unique “stadium to stadium” sporting experience, with a route that takes runners through Wembley Stadium, the iconic home of English football, as well as finishing at Allianz Park, home of the mighty Saracens Rugby Club.

As well as starting the race, Mo will be on hand to meet and greet runners on the day and will be presenting the men’s, women’s and wheelchair race winners with their trophies.

He said: “Growing up in London, I know what a great city London is. I’m excited to be involved in a race that celebrates the London legacy and offers runners the chance to fully embrace some of our most iconic venues in North London. The interest in running has grown at an incredible rate over the past few years, and events like the Vitality North London Half Marathon offer a great entry platform to encourage even more people to get active, and take on a personal challenge!”

Jamie Warren, Head of Marketing and Commercial at GO2, said: “The Vitality North London Half Marathon is an event designed with race experience in mind; we want to appeal to regular runners, as well as those new to the sport looking for a once in a lifetime experience.

“We are thrilled that Mo Farah, one of Great Britain’s most loved running stars, has agreed to support the race and I am sure this mixed with running stadium to stadium, will ensure this is a race that will live long in the memory! Places are going quickly so we’d urge people to sign up soon to avoid disappointment.”

Speaking for PruHealth and PruProtect, title sponsors of the Series, Neville Koopowitz, CEO, Vitality added: “We are delighted that Mo Farah has agreed to start the Vitality North London Half Marathon. Having  a double Olympic and double World champion start this inaugural race will not only raise its profile but will also provide a fantastic memory for all our runners on the day.”