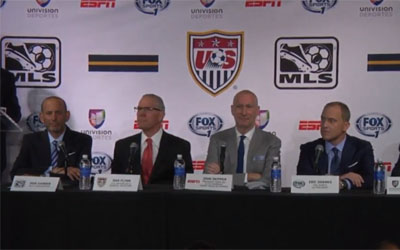 The premier North American soccer tournament have reached eight-year agreements with the networks to televise MLS and U.S. Soccer matches in the United States through the end of 2022.

For the first time in Major League Soccer’s history, all three television partners will feature an exclusive MLS Match of the Week, providing soccer fans throughout the country with a destination day and time for each network.  The Univision family of networks will televise a game of the week on Friday evenings — primarily on UniMás — and a wrap-up show on Sundays.  The Friday night match on the Univision family of networks will be the first time a Spanish-language television network will have its own exclusive night with a major professional sports league based in the United States.

Soccer fans will be able to enjoy a doubleheader of MLS action every Sunday, as ESPN and FOX Sports 1 will televise back-to-back MLS matches on Sundays at 5 p.m. and 7 p.m. ET, respectively.  More than 125 MLS matches will be televised annually on the three networks.

“We are honored to partner with ESPN, FOX and Univision to form the most comprehensive U.S. media rights partnership in the history of soccer in our country,” said Commissioner Garber.  “The commitment from our television partners in terms of structure, length and magnitude is unprecedented, and these new partnerships are another strong indicator of the League’s continued growth and the overall fan interest in our sport.”

“We are extremely pleased to have extended our partnerships with ESPN, FOX Sports and Univision,” said U.S. Soccer President Sunil Gulati. “The commitment made by our television partners to broadcast such a wide range and quantity of games demonstrates the growing demand for soccer in our country and provides a platform for our growing fan base to follow the game both for club and country.”