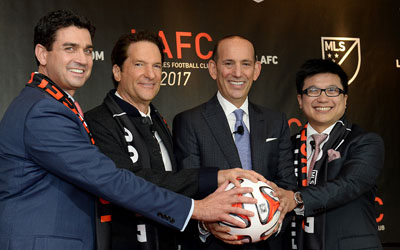 Los Angeles Football Club is scheduled to debut in 2017 in a new soccer stadium built specifically for the team in the greater Los Angeles area.

“This visionary ownership group will chart a course that will further elevate the sport in this great city and, combined with a new state-of-the-art stadium, accelerate us down the path toward becoming one of the top soccer leagues in the world.”

Nguyen, the Managing General Partner of IDG Ventures Vietnam, is the managing partner of the new MLS club.

“We believe this team can become one of the most outstanding clubs in Major League Soccer and a globally-recognised brand,” said Nguyen.

“The business of sports and entertainment is all about winning on the field and providing an exciting product that will develop a passionate and loyal fan base,” said Guber.

“The Los Angeles market has millions of soccer supporters, and we know that this new team can fulfill the promise of success on the field and provide a great experience for our fans.”

“Today is day one and time for us to focus on developing a world-class stadium for the club to play in and for fans to enjoy,” said Nguyen.

The new Los Angeles team’s brand identity, along with the front office, coaching and administrative staff will be announced at later dates.

They will become the second soccer franchise in Los Angeles, which is currently home to the four-time MLS Cup champion LA Galaxy.

“Los Angeles is a diverse, vibrant market with millions of soccer fans, and we look forward to an intense rivalry between the Galaxy and Los Angeles Football Club,” added Garber.

With the addition of the new Los Angeles club, MLS will become a 22-team league in 2017 as a new expansion team in Atlanta will also begin play that year. Two more expansion teams will be added by 2020.