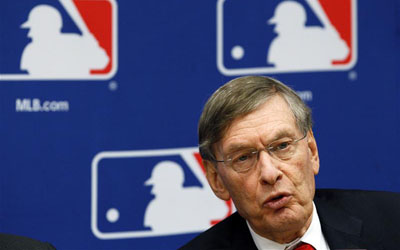 Major League Baseball commissioner Bud Selig, who plans to retire in January, announced the formation of a succession committee to find a suitable candidate to take his position.

The committee will be chaired by Cardinals chairman and chief executive officer Bill DeWitt Jr. and will include six other owners: Dick Montfort of the Rockies, Dave Montgomery of the Phillies, Arte Moreno of the Angels, Bob Nutting of the Pirates, Jim Pohlad of the Twins and Jerry Reinsdorf of the White Sox.

“It’s a committee that really represents, I think, the constituency [of baseball],” Selig said.

The committee will report to MLB’s executive council, which will ultimately present a candidate or candidates to be voted on by the full ownership of MLB’s 30 clubs. A candidate needs to receive 24 of the 30 votes to be elected Commissioner.

DeWitt stressed that the committee will seek input from all teams and that the process will be confidential.

“We’re obviously looking for a strong CEO, a visionary leader who has a passion for the game,” he said. “Certainly we’ll look to maintain the integrity of the game. Continue to grow the great game of baseball. And build on the tremendous accomplishments and legacy of [Selig].

“And the process goes much more smoothly if there isn’t all kinds of speculation. We’re not going to announce when we get a list together or who the potential candidates are, whom we’ve talked to or any of that.”

The committee has already met, but DeWitt would not predict when a candidate or candidates might be offered.

DeWitt said that while no candidates have been discussed so far, the process will be “wide open” and include people from both inside and outside baseball.

“I think anybody who has experience inside the game, that’s valuable,” he said. “But there are a lot of attributes we’re looking for. But that won’t be a specific criteria.”

Selig was asked about speculation he might remain on the job beyond the end of his contract.

“I don’t really want to comment on that,” Selig said. “The owners have been great. I’ve had lots of conversations with owners about this in the last few months. The only thing I can say is that I’ve determined in life that there’s a time to come and a time to go. And I have determined it’s time to go. There’s no sense in playing any games.”

Selig was asked if there was a possibility that he could remain involved in baseball in some sort of emeritus role.

“Details will all be worked out in the coming months,” he said. “[The committee has] a job to do now and let’s let them do their job.”

“It will be a tough act to follow,” DeWitt said. “He’s done an incredible job in coalescing 30 clubs, all with different views on various matters, and having them come together. That’s highly unusual. Depending on who’s the successor, we’ll see if that can continue.”