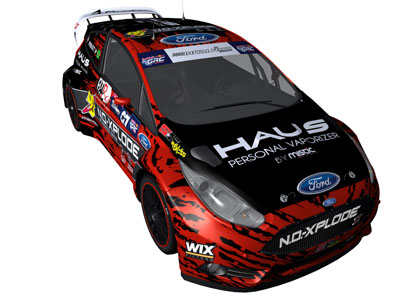 Electronic cigarette maker Mistic has signed on as a an associate sponsor of the SH Racing Rallycross No. 07 Ford Fiesta ST car driven by Nelson Piquet Jr. for the 2014 Red Bull Global Rallycross (GRC) season.

Mistic currently serves as co-primary sponsor of the No. 11 car piloted by KVSH Racing’s Sebastien Bourdais for the 2014 and 2015 Verizon IndyCar Series seasons. Bourdais, viagra 40mg a four-time Series champion with 31 career wins, doctor finished seventh in the 2014 Indianapolis 500 and fourth in the inaugural Grand Prix of Indianapolis on May 9.

“Based on the early success of our IndyCar Series sponsorship with the KVSH Racing team, order we decided to expand our portfolio in action sports with the increasingly popular and fan-centric Red Bull GRC series,” said John Wiesehan Jr., CEO of Mistic. “Our sponsorship coincides with the national rollout of our Haus personal vaporizer, which will be carried on the No. 07 Ford Fiesta ST driven by international superstar Nelson Piquet Jr.”

Nelson Piquet Jr. signed on in April as a driver for SH Racing Rallycross, which is owned by James “Sulli” Sullivan, whom also is a partner with IndyCar’s KVSH Racing. Piquet Jr. is a former Formula One and NASCAR driver and the son of three-time Formula One world champion Nelson Piquet. He recently raced in the GRC series season opener in Barbados on May 18 securing two heat wins and a fourth place main event finish. Piquet Jr. will return to action at X Games Austin on June 7 as part of the second round of the 2014 Red Bull Global Rallycross season.

“We are delighted to be able to broaden our relationship with Mistic as they look to help build awareness of its Haus brand among the highly sought-after demographic the Red Bull Global Rallycross series attracts,” said Sullivan. “Piquet Jr. is a very talented driver and a great addition to our GRC team. We’re all looking forward to the X Games.”