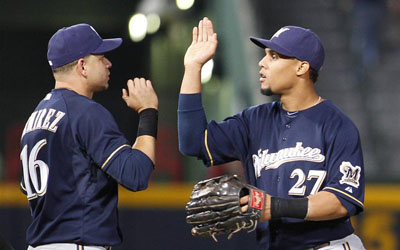 Redevelopment of the Toyota Territory in right-center field at Miller Park is the key element of the new multi-year partnership with the auto company.

The area will be changed from a 24-person private group space to a facility open to all fans. The 1,493-square foot area will be capable of holding more than 100 people.

“We are excited to expand our partnership with Toyota and we are certain that the improved Toyota Territory will be a popular location for fans to enjoy Brewers baseball,” said Brewers chief operating officer Rick Schlesinger.

The club explained that the concourse level, with an approximate capacity of 75 guests, will be open to all fans at all 81 regular-season home games. Seating and high top tables will be available on a first-come, first-serve basis.

A raised portion of the new Toyota Territory that will hold approximately 30 people will be open to all fans during 41 regular-season games. Toyota will have use of this section for the remainder of the games for promotions and corporate functions.