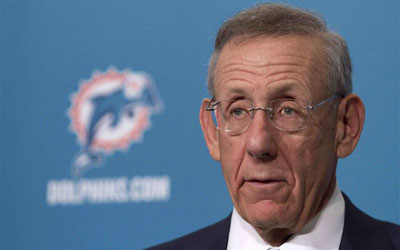 Miami Dolphins are set to receive bonus payments for hosting marquee events in exchange for Dolphins owner Stephen Ross being solely financially responsible for the $350 million renovation of the stadium.

“I want to thank the Board of County Commissioners and Mayor Gimenez for approving this unique and creative plan to bring Super Bowls and other marquee events to Miami-Dade County,” Ross said in a statement. “We have one of the world’s most aspirational cities and, as such, deserve a stadium that will provide significant economic impact to Miami-Dade County. This will not only secure the future of the Dolphins, but will ensure that Miami has one of the world’s best venues to host events of this magnitude going forward.”

“I”m just excited that we can break ground and get started on creating a world-class facility for a world-class community,” said Dolphins President/CEO Tom Garfinkel. “Now the hard work really begins. We’ve got to get the renovation plans finalized, start construction and get it done.”

With the agreement with Miami-Dade County in place, Garfinkel said the Dolphins intend on bidding next spring for the next available Super Bowl, SB LIII to crown a champion in the 2018 season.

“That was part of the intent of trying to get it done,” Garfinkel said. “We want to bring in as many marquee events as we can as soon as we can.

“Now the hard work really begins. We’ve got to get the modernization plans finalized, start construction and get it done.”

Garfinkel said the modernization of the stadium would be done in two stages and construction could begin within a few weeks. The goal is to have all of the work done before the start of the 2016 season.

The new deal was reached under what was termed a Performance-Based Marquee Event Grant Agreement.

The agreement, which is designed to help bring marquee events such as Super Bowls, college football championships, college football semifinals, World Cup soccer matches as well as other international soccer events, is for a period of 20 years.