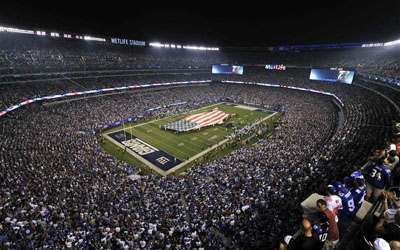 The MetLife Stadium, ampoule home to the New York Jets and New York Giants have announced a sponsorship deal with technology firms SAP and EMC Corporation.

MetLife Stadium, sale the Jets and the Giants will explore utilizing EMC and SAP technology to introduce a new, advanced level of fan interaction and activation throughout the entire building to enhance the gameday experience for fans.

The agreement with SAP and EMC reflects a strong commitment by the teams to a cutting-edge technological/digital partnership in seeking to create a world-class guest experience and helping to cultivate the most technologically advanced stadium possible. EMC and SAP are joining a forward-thinking operation, including the two teams’ fan bases. To date, more than 500,000 fans of the Jets and Giants have downloaded the teams’ official apps. On game day, Jets and Giants fans use these team apps to complete their second-screen experience, watching replay video in MetLife Stadium, checking fantasy football statistics, and interacting with the teams and other fans via social media.

“Since its opening in 2010, MetLife Stadium has actively set the standard for innovative technology implementation at national and international sporting venues,” said Woody Johnson, chairman and CEO of the Jets. “With the addition of our new sponsors SAP and EMC, we intend to raise the bar even higher and seek to introduce a new, advanced level of fan interaction and activation throughout the entire building.”

“Providing every visitor to MetLife Stadium with a premier fan experience remains the ultimate priority,” said Steve Tisch, chairman and executive vice president of the Giants. “SAP and EMC will help us to explore a powerful technological presence never felt before in a sports stadium.”

“We expect that our partnership with SAP and EMC, in addition to the relationship we already have with Verizon, will ultimately provide technology and innovations that no other stadium or arena can offer,” said John Mara, Giants president and CEO. “Our fan experience at MetLife Stadium will be unrivaled when it comes to what we hope to provide in high-tech options.”

Joe Tucci, EMC chairman and chief executive officer, said: “EMC is thrilled to partner with the Giants, Jets and SAP to revolutionize the fan experience at MetLife Stadium. This innovative use of EMC and SAP technology will engage Jets and Giants fans in some pretty amazing ways. This is another great example of how cloud computing and mobile devices like smartphones and tablet computers are becoming real game changers in our daily lives.”

“The New York Giants and the New York Jets are fierce competitors on the football field, and their fans are among the most passionate in all of professional sports,” said SAP co-CEO Bill McDermott. “SAP is honored to partner with EMC and the Giants, Jets, and MetLife Stadium to re-imagine the fan experience by delivering cutting-edge apps that make the action of gameday even more gripping, for fans both inside and outside the stadium.”

SAP and EMC join Pepsi, Verizon and Anheuser-Busch, along with MetLife, as the major on-site sponsors of the two-year-old, 82,500-seat venue. The multiyear sponsorship became available when MetLife, an original cornerstone partner, acquired naming rights to the stadium in August 2011.

The cornerstone entrances are a major feature of the building’s architecture and amenities, adding color, excitement and activities to the fan experience. Each of the four cornerstone zones serves as a main entry point to the stadium. Visible from the approach to the stadium and the parking lots, they are identifiable landmarks for the fans. They offer a collection of activities, starting at the perimeter ticketing gates, extending through the corner sponsor’s plaza and continuing vertically through each level of the stadium.

SAP will be the featured partner in permanent branding applications throughout the southeast corner of the stadium, highlighted by the naming of the entrance, to be called SAP Gate, and in-bowl signage above the corner videoboard. EMC and SAP will also share a number of other benefits, including Jets/Giants/Stadium marketing rights; team digital signage, media and promotional assets; event-day and on-site client hospitality opportunities; and team experiences.