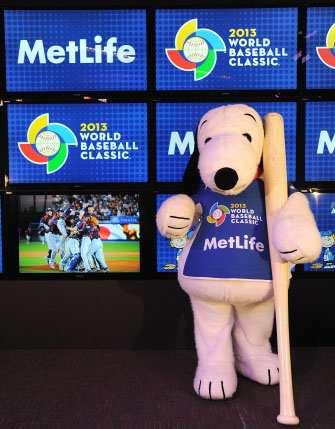 MetLife has signed on to be a Global Sponsor and the Official Insurance Company of the 2013 World Baseball Classic.

MetLife, purchase and its brand ambassador Snoopy, clinic will be incorporated into multiple aspects of the event including in-stadium exposure and on worldwide media platforms. MetLife, a leading global insurer operating in 46 countries worldwide, is joining Brand USA, Delta Air Lines and Konami as the fourth Global Sponsor of the tournament.

As part of the agreement, MetLife will be the title sponsor of the All-World Baseball Classic Team. The MetLife All-World Baseball Classic Team will be comprised of the best performers at each position during the tournament. Players selected to the previous two teams have included two-time tournament M.V.P. Daisuke Matsuzaka (Pitcher, Japan – 2006 and 2009), Ken Griffey Jr. (Outfielder, USA – 2006), Adrian Beltre (Third baseman, Dominican Republic – 2006) and Hyun-Soo Kim (DH, Korea – 2009).

MetLife’s long experience and expertise in covering premier sporting events from above will allow it to provide dynamic aerial coverage from its blimps – Snoopy One, Snoopy Two and Snoopy J. The MetLife blimps will be flying above all the games played in Phoenix, Arizona; Miami, Florida; Tokyo, Japan and in San Francisco, California. A camera will be in each blimp capturing scenic aerial footage, as well as crucial in-game moments, that will be incorporated into the game broadcasts on MLB Network, ESPN Deportes and the worldwide feed being distributed to more than 200 countries and territories.

To add to the excitement and fan experience at the games, Snoopy, donning a World Baseball Classic jersey, will be making special appearances, interacting with fans and distributing gifts.

“With such a strong presence in the global marketplace, MetLife is well-positioned to illuminate its brand message across the expansive World Baseball Classic platform,” said Paul Archey, Senior Vice President, International Business Operations, Major League Baseball. “MetLife will have a variety of touch points, both inside and outside the tournament venues, fully integrating them into the event program this March.”

“Many of the countries fielding World Baseball Classic teams are also countries where MetLife is a leading insurer,” said Richard Hong, vice president of brand, advertising & promotion, MetLife. “With MetLife’s strong presence in Japan and Korea where the sport is widely popular, and with market leading positions in countries like Mexico and the U.S., millions of our customers and thousands of our employees are looking forward to watching some of the world’s best play baseball this March.”

The 2013 World Baseball Classic, which is the third edition of the tournament, will feature the world’s best players representing their countries and territories. Thirty-nine games will be played in seven venues in four nations and territories from March 2 through March 19, 2013.